The Ballina Shire Australia Day Awards were announced at the official celebrations held on Tuesday 26 January 2021 at the Lennox Head Cultural Centre.

There were 35 nominations acknowledged across the categories of Sports, Young Citizen, Senior Citizen, Environmental, Community Event, Arts/Cultural and Volunteer of the Year. The awards celebrate the achievements and contributions individuals and organisations make to our community.

Mayor David Wright with special guest James Bracey, Olympic sports reporter and television host for Channel Nine, and Master of Ceremonies Liz Ellis, Australia’s most successful netballer and Ballina Shire local, presented the awards. Anne Thompson, 2020 Citizen of the Year, was called on to announce the 2021 Citizen of the Year. The award winners are as follows: 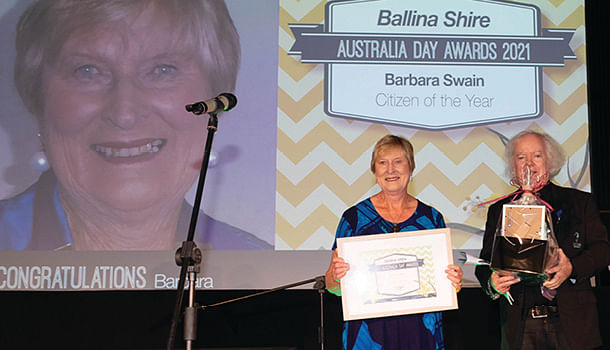 Citizen of the Year

Barbara Swain
25 years ago sadly Barbara's son Barry lost his battle with depression. Two years later Barbara started providing toiletry packs and clothing to people in Lismore Base Mental Health Unit who didn't have family or friends to provide for them. Barbara did this single-handedly for two years. Then when she got the opportunity to speak at a Rotary Heath Mental Forum, she asked for help. This was the birth of the 'Mental Health Support Group' (MHSG). This volunteer group is now a registered charity that supports people with mental illness by providing housing, clothing, furniture and other necessities. Barbara believes that Mental Health Support Group is the only organisation providing this service in the Northern Rivers. It is run by volunteers and receives no government funding. 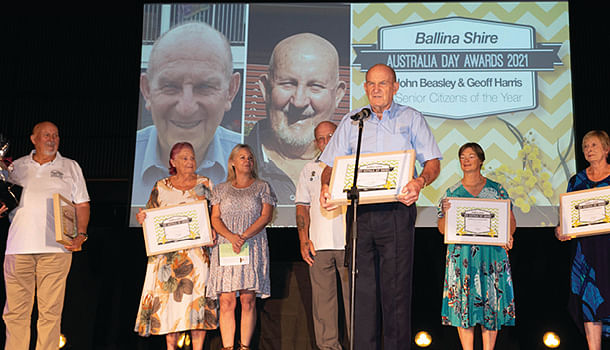 Senior Citizen of the Year

John Beasley, OAM
John Beasley, or Beas as he is known, is the Secretary of Lennox Head-Alstonville Surf Lifesaving Club. He has held this role since 2011 and has been involved in the surf lifesaving movement for an incredible 66 years. Beas first joined Surf Lifesaving at The Entrance in November 1953. He joined Lennox Head-Alstonville Surf Lifesaving Club in 2004. In his capacity as Secretary, Beas sets the Management Committee Meeting agenda and records the minutes. Beas is also an official for the club; a role he has proudly occupied for more than 60 years.

Geoff Harris
Geoff has been the president of the Lennox Head-Alstonville Surf Life Saving Club for many years. He is present at all events and works tirelessly as a volunteer to keep the club running. The surf club wouldn't run as well without volunteers like Geoff. He has given years of service to the club and the Ballina Shire community.

The Late Pat Kennedy (posthumous award)
For 27 years Pat and Jeanette Kennedy have been delighting the young and old with their Christmas light display at their home in West Ballina. Each year Pat has erected up to 100,000 lights to form an impressive festive display. Despite the hot and humid December nights, Pat and Jeanette would dress as Santa and Mrs Claus. After providing so much joy to the community for so many years, sadly Pat Kennedy passed away on October 17 2020. We honour Pat for his spirit and the joy he and Jeanette have bought to so many people.

The other nominees for the Senior Citizen of the Year Award were: Barbara Swain, Ron Creber and Warren Lusted. 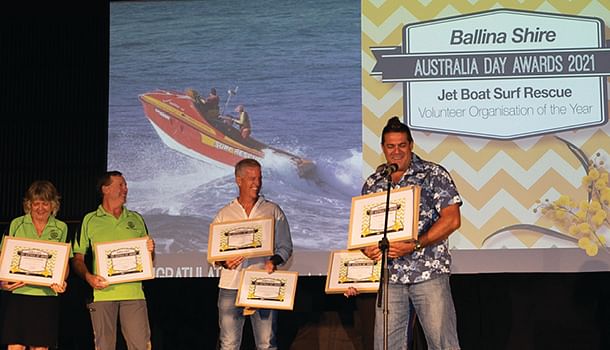 Volunteer Organisation of the Year

This year we recognise and award two deserving organisations, Jet Boat Surf Rescue and Rotary Club of Ballina-on-Richmond for their tireless behind the scenes work to support the community. 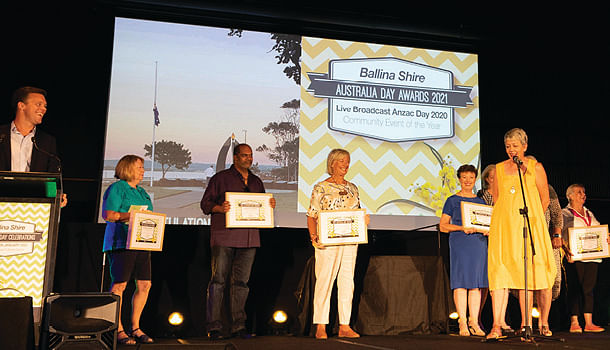 Community Event of the Year

2020 ANZAC Day Live Broadcast Paradise FM
Throughout 2020 Paradise FM kept community groups and the wider community connected during COVID. The station broadcast late into the night and throughout the day, which was beneficial for residents who were isolated at home. Paradise FM’s live broadcast for Anzac Day encouraged residents to come out of their homes and commemorate the Anzacs in their streets and with their neighbours. The live broadcast and interviews throughout the day helped our community to commemorate and be a part of the tradition of Anzac Day. 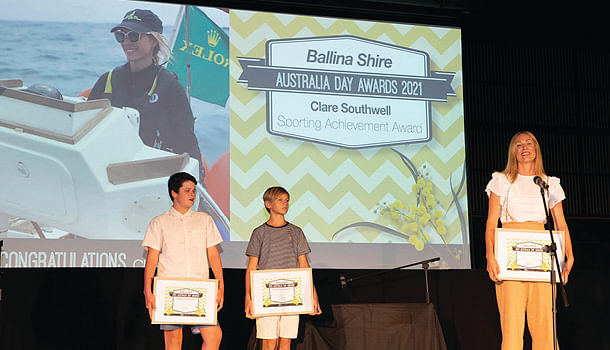 Clare Southwell
Having sailed competitively in her youth, Clare had a 20-year break from sailing. She is now proving to herself, her daughter, and others (especially female sailors) that you can fulfil your dreams at any time in life. Clare is one of only two female sailors to sail the powerful 18-foot skiffs in Australia and one of only three in the world. She recently won the 18-foot skiff State Titles in Queensland as part of a three person crew. She also competed in the prestigious Sydney to Hobart Yacht Race in 2019. Her ethos is that you don't have to be the best to get to the top, just the most determined.

The other nominees for the Sporting Achievement Award were: Finnigan Robinson and Kalani Franklin. 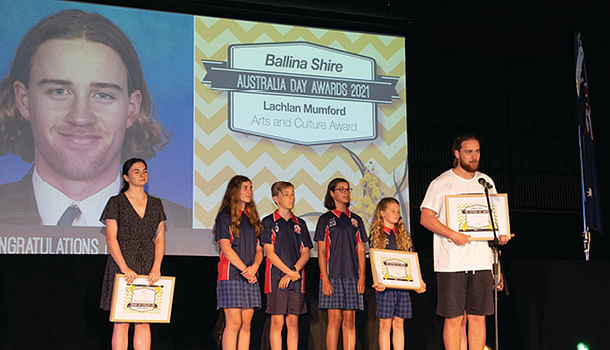 Lachlan Mumford
Lachlan completed his HSC year at Emmanuel Anglican College in 2020. Lachlan’s observant eye in developing his visual art skills produced a beautiful and moving major work that has been chosen for the HSC Art Express. Art Express showcases the highest calibre of Year 12 major works across NSW. To be chosen means Lachlan’s work will be exhibited in the NSW Gallery and other regional galleries across the State. This achievement is reward for Lachlan’s hundreds of hours exploring his chosen medium of photography. Lachlan is also an avid violinist and has performed with the Lismore Symphony Orchestra. Aside from his creative pursuits, Lachlan also inspired and led the younger students at Emmanuel to participate and enjoy College events as the Captain of Purcival House. 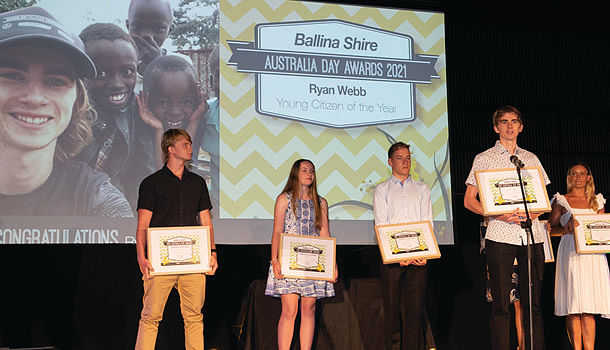 Young Citizen of the Year

Ryan Webb
Ryan has a big heart and is passionate about helping others including the elderly, homeless, lonely and less fortunate. Ryan donates to many charities and volunteers his time with Five Loaves and the North Coast Mental Health Support Group. He has travelled to Africa with Kenya Health at his own expense and travelled to Nepal where he helped to paint the homes of lepers. Ryan also actively mentors young kids in Alstonville. Ryan hates injustice and he wants to make his local community a better place. 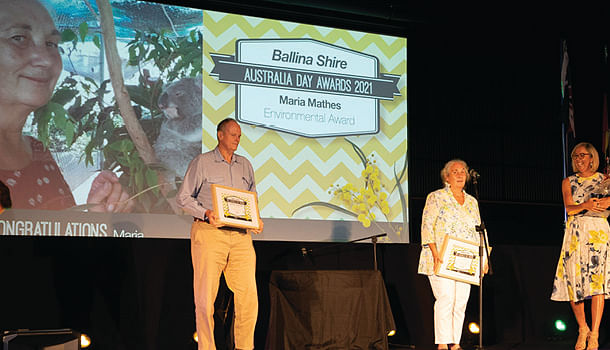 Maria Mathes
Maria has been a threatened species ecologist for more than 30 years. She has a particular interest in koalas, threatened plants, and ecological communities including koala habitat and fire ecology. For the past 15 years she has dedicated her time to recovering Ballina's koala population and building a network of more than 100 landholders as koala watchers. She is a champion for Ballina's koala population and exhibits sound ecological knowledge as an educator, both in the field and with her highly-engaged social media audience.

The other nominees for the Environmental Award were: Australian Seabird Rescue, Struan Robertson and Graeme Fraser.