A full-recording of the livestreamed event can be viewed below or on YouTube.

The Ballina Shire Australia Day Awards were announced at the livestreamed ceremony held on Wednesday 26 January 2022.

30 nominations were acknowledged across the award categories of Sports, Young Citizen, Senior Citizen, Environmental, Community Event, Arts/Cultural and Volunteer of the Year. The awards celebrate the achievements and contributions individuals and organisations make to our community.

Mayor Sharon Cadwallader with special guest Liz Ellis, Australia’s most successful netballer and Ballina Shire local, and Master of Ceremonies Sandra Jackson, presented the awards. Barbara Swain, 2021 Citizen of the Year, passed the baton and announced the 2022 Citizen of the Year via a pre-recorded message.

Congratulations to the following award winners and nominees:

Citizen of the Year 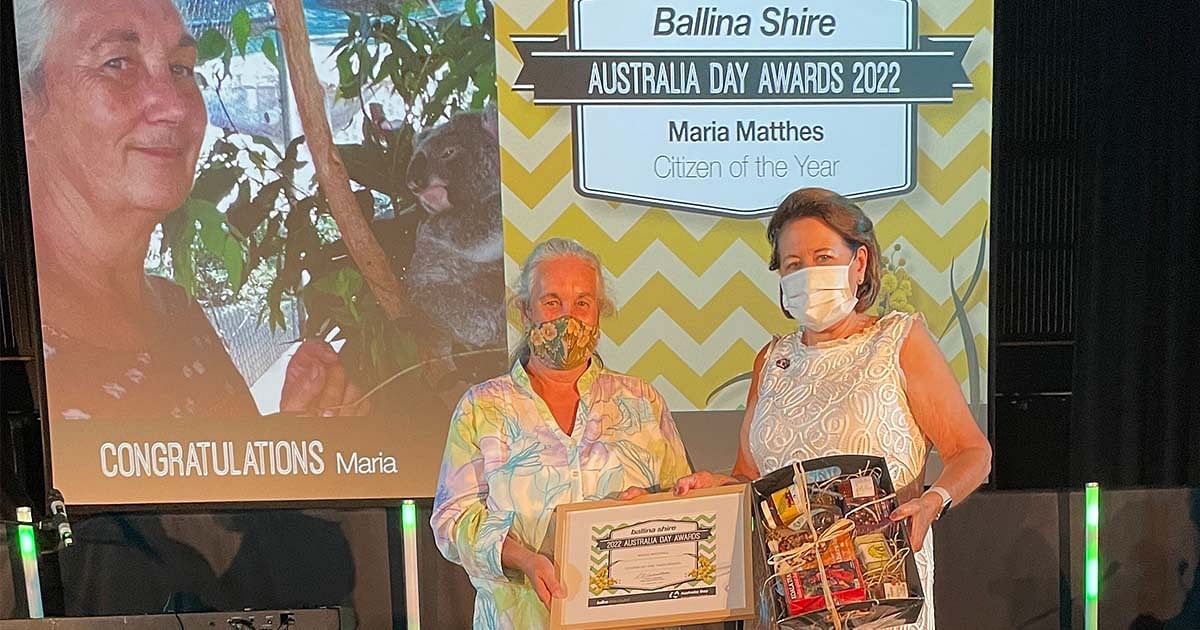 Maria has been a threatened species ecologist for more 30 years, with a particular interest in koalas, ecological communities including koala habitat and fire ecology, recovery planning and education.

In 2016 she became a koala rescuer with Friends of the Koala. Ever since she has been on call, day and night, to conduct welfare checks and to capture sick or injured koalas and transport them to the Koala Hospital in Lismore.

Maria is someone who has had the courage to give up material pursuits to follow her passions, give to others and make positive changes to her community. Her tireless dedication to protecting Ballina’s koala population and promoting awareness of their significance is truly inspirational. As a koala rescuer for the Ballina Shire, Maria shows outstanding courage. It’s not an easy job to rescue a koala that has been hit by a car or attacked by a dog, to get them to care and then follow their journey – never knowing whether this will be a lucky koala with a happy rehabilitation story.

In April 2021, at the age of 13, Tyler Dogan became the National Under 15’s 2000-metre Steeplechase Champion at the Australian Athletics Championships. Tyler beat a nationwide field of competitors to win convincingly. He was able to achieve this despite numerous challenges including minimal coaching, no facilities to train on, and often having to train on his own due to Covid restrictions in the lead up to the event.

A month earlier, in March 2021, Tyler also gained a silver medal at the NSW State Little Athletics and won Queensland State Champion in the Under 15’s 2000-metre Steeplechase in Brisbane. Tyler has shown outstanding self-motivation and perseverance to achieve his sporting goals. His efforts are an inspiration to other young athletes, and to our wider Ballina Shire community.

Veronica Silver has been club secretary of the Alstonville Water Polo Club for 19 years and is now in her 20th year. She coordinates the club quietly and efficiently, organising teams, fundraising rosters, and grant applications.

She was the backbone of the club when numbers were dwindling on the north coast. She worked with Far North Coast Water Polo to facilitate the sport and make the competition fun and competitive. Thanks to Veronica’s commitment as a selfless organiser and dynamic manager, women's water polo on the Far North Coast has experienced 200% growth in numbers, with the women’s competition now spanning Alstonville, Ballina, Byron Bay, Lismore and Lennox Head. Her efforts in fundraising and grant applications have also enabled the club to have the equipment and facilities to host international matches and training events for the Australian women's water polo team.

The other nominee for the Sporting Achievement Award was: Bec Washington

The Ballina and District Historical Society was established in May 2019. In December that year the society was granted a lease on Pimlico Hall to develop the Ballina District Museum. The museum opened to the public in October 2021 and has been developed solely by volunteers.

The museum showcases the history of the Ballina district from the First Nations Nyangbul people – the indigenous custodians of the Ballina district – to the exploration of the Richmond River by Captain Henry Rous in 1828, to the development of European settlement instigated by the pioneer cedar cutters who arrived in 1842, through to the early 1900s.

The society aims to bring the unique history of the Ballina district alive and accessible to all.

Sue has made a very significant contribution to the arts in Ballina over the past 20 years as a director of theatrical community productions. She has directed more than 35 productions at both Ballina Players and with Supa North, the theatrical company she began with her husband Paul. This includes many sold-out performances of shows such as Mary Poppins and the Boy from Oz.

Sue is an avid supporter of promoting the performing arts to youth. Every year she visits schools in the Ballina Shire to present awards to drama students. Even with the difficulties of Covid restrictions and some ongoing health issues, Sue was able to be involved in directing a very successful season of “Downtown” in December 2020 and “Smokey Joes Café” in 2021.

The other nominees for the Arts/Cultural Award were: Ali Chigwidden, Cathy Gordon, and Screenworks.

Young Citizen of the Year

Eli is a quiet achiever who is passionate about supporting local organisations and charitable causes. He is a full-time paramedic student at Griffith University and part-time baker at Lennox Head IGA. Eli ran 200km in a month to raise $8,000 for 'The Healthy Minds Club', a local organisation that encourages men to seek help for mental health issues. He was also part of a team who raised $45,000 during the 2021 Starlight Children’s Swim Challenge, and he has helped to collect surfboards for a donation to kids in Vanuatu. Born and bred in Lennox Head, and a member of the Lennox Trojans, Eli has developed a reputation as a quiet, local legend.

The other nominees for the Young Citizen of the Year Award were: Alex Chapman and Kim Coupe.

Senior Citizen of the Year

Barry is an avid community worker with a long history of community service. He began volunteering from a very young age by joining his parents in their volunteer activities. Barry works tirelessly for numerous local community organisations, including a 60-year association with Pearces Creek Hall, and seven years volunteering with the Alstonville Tibouchina Day Club.

Barry brings a positive, measurable change to the Alstonville/Wollongbar community.

His generosity and can-do attitude are an inspiration to his family, friends and colleagues. At a time when most people are putting their feet up, Barry continues to put his hand up!

The other nominees for the Senior Citizen of the Year Award were: Frank Hughes, Helen Lockton, Patrick Braz, and Tracey Everingham Armstrong.

Volunteer of the Year

Jo joined Northern Rivers Animal Service (NRAS) Committee in 2013 as the Marketing and Publicity Officer before becoming secretary in 2014 and president in 2015. As president Jo is the face and voice of NRAS, advocating for the rights of cats and dogs that are abandoned, abused, lost or unwanted. Since 2001, more than 1,600 cats and dogs have found a ‘furever’ home. Jo chairs the NRAS committee and provides leadership for the many volunteers that support the organisation.

The Ballina Mother’s Day Classic is another community event that is close to Jo's heart. Jo has coordinated this event for the past 10 years, raising approximately $5,000 to $8,000 each year for the National Breast Cancer Foundation, to support breast cancer awareness and education.

The other nominees for the Volunteer of the Year were: Allan Noble and Maria Matthes.

Community Event of the Year Award

It is not often that four major community service organisations in a town work together to provide a vital service in a time of crisis, but when our community was plunged into another Covid lockdown last year, many people found themselves in need.

In 2021 the Dementia Inclusive Ballina Alliance used a Northern Rivers Community Foundation grant to help local residents living with dementia, and their carers, to improve their digital literacy skills and reduce the social isolation experienced due to the Covid pandemic.

A project officer trained participants to use Zoom, email, videoconferencing, chat groups, social media, online banking and MyGov. This enabled the Alliance’s Advisory Group, which consists of people with dementia and their carers, to meet regularly and keep in contact with family and friends. This project made a valuable contribution to the quality of life experienced by this vulnerable group of people in these challenging times.

The other nominees for the Community Event of the Year Award were: Gift Wrapping 10-year anniversary (Scope Club of Ballina), Covid Crisis Hot Meal Service (Cherry Street Sports Club), Social Support Program for the Elderly (Ballina Meals on Wheels), the Battle of the Concert Bands (Resonator Music), and the Starlight Super Swim Challenge (Rhian Slapp and the Boaty Boys).

“Ballina’s kerbside bin collectors do an amazing job” according to local resident June Zentveld, who has nominated Council’s waste truck drivers for an Environmental Award. But June’s not the only one who is singing their praise, in fact, Council receives numerous letters and emails of appreciation for our kerbside garbage collectors.

A team of six full-time and five fill-in drivers work hard every day to complete their bin collection routes efficiently and to a high standard.

Drivers contend with numerous challenges every day, including narrow roads, cul-de-sacs and vehicles parked along the kerb which block access to bins. There are six main bin collection routes across Ballina shire, with an additional three half-runs added recently due to population and service growth. The statistics are staggering: one truck empties up to 1,200 bins per day, and together Council’s fleet of six waste trucks collect up to 4,000 bins a day, or over 1 million bins each year!

The other nominees for the Environmental Award were: Empire Vale Public School (Koala Minecraft Project), Revive the Northern Rivers, and the Rotary Club of Ballina-on-Richmond (Recyle and Reuse Program). 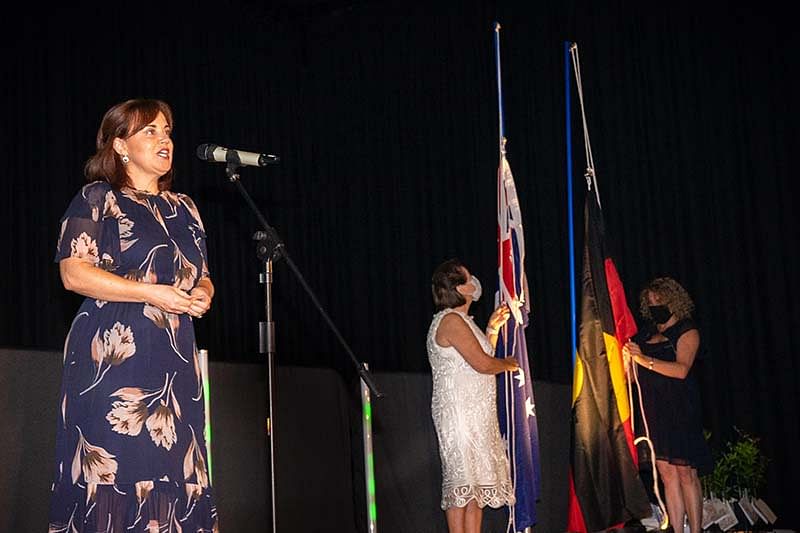 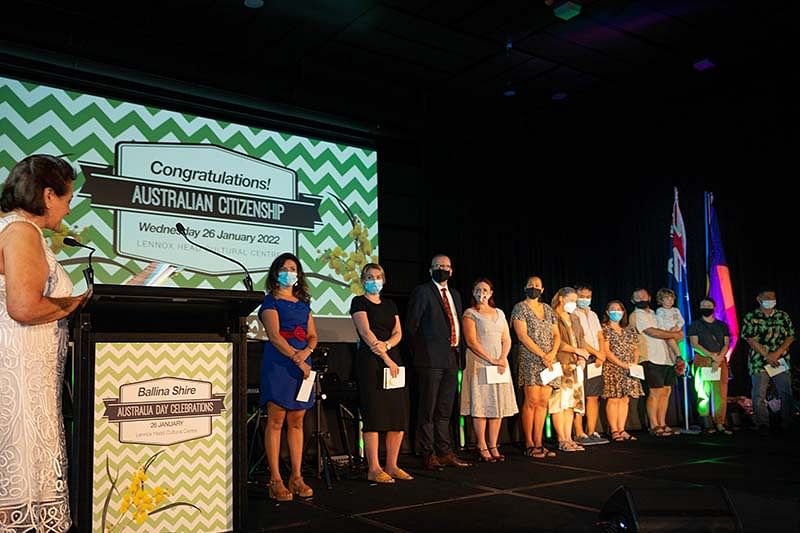 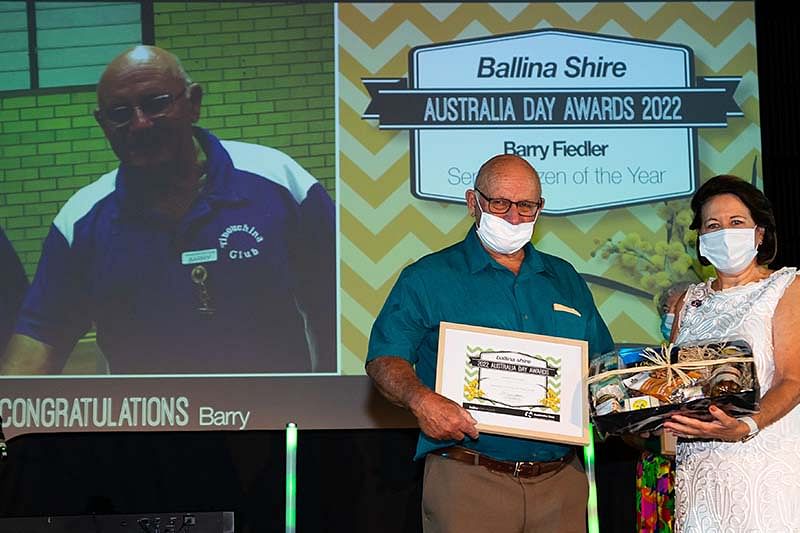 Senior Citizen of the Year Congratulations to Barry Fiedler 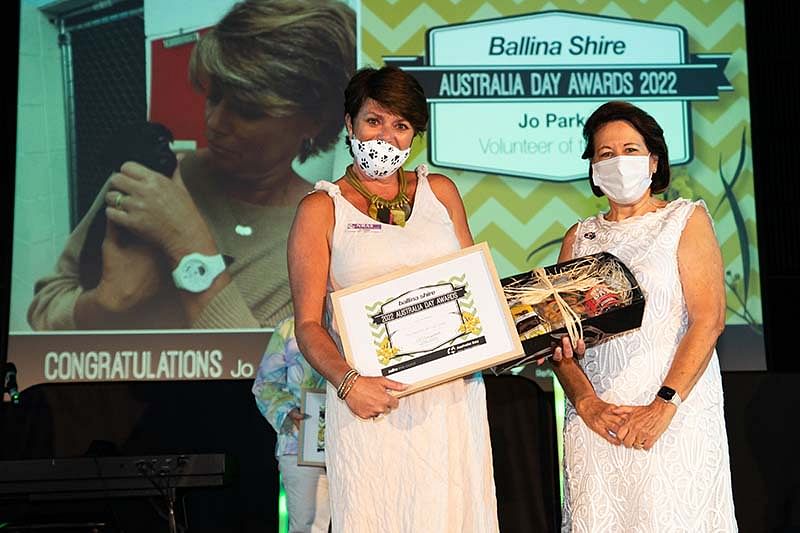 Volunteer of the Year Congratulations to Jo Parker 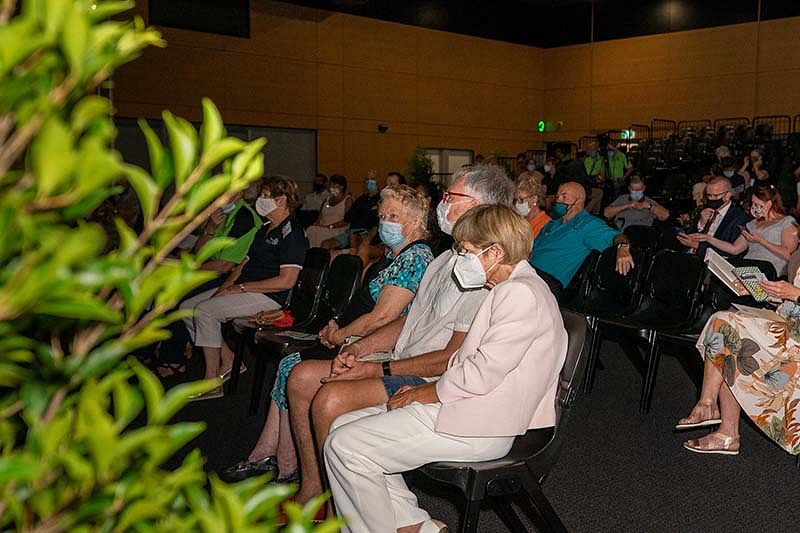 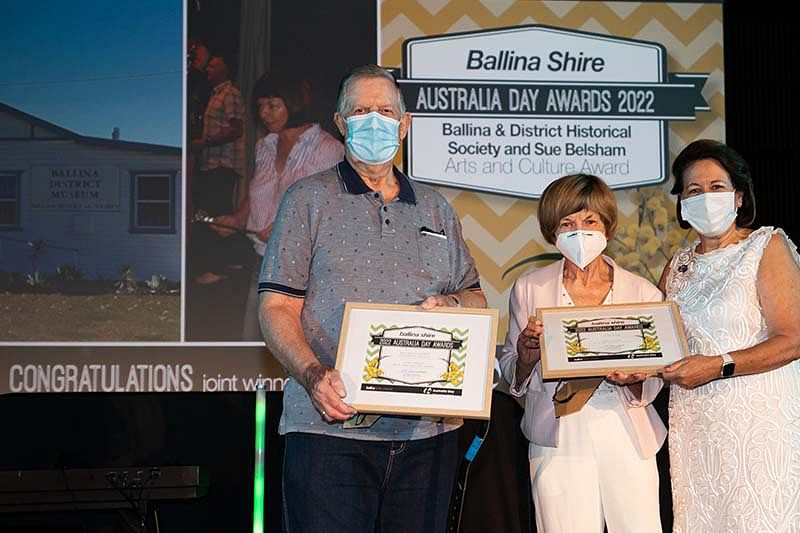 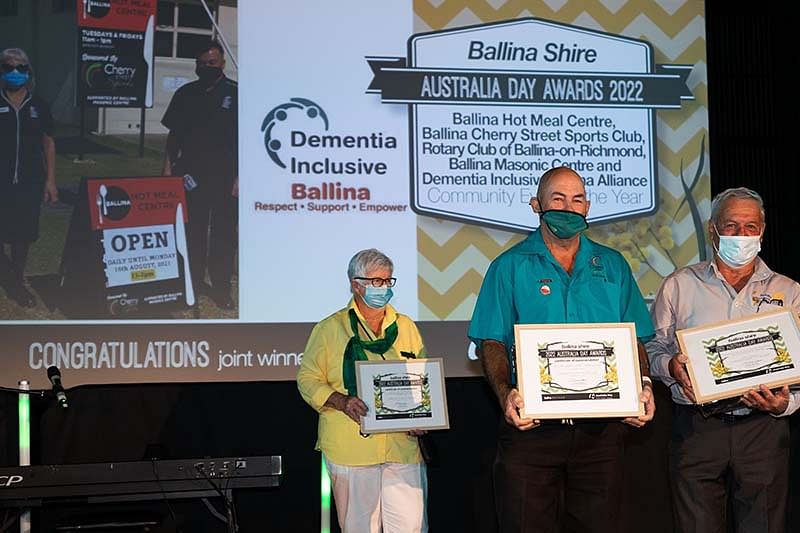 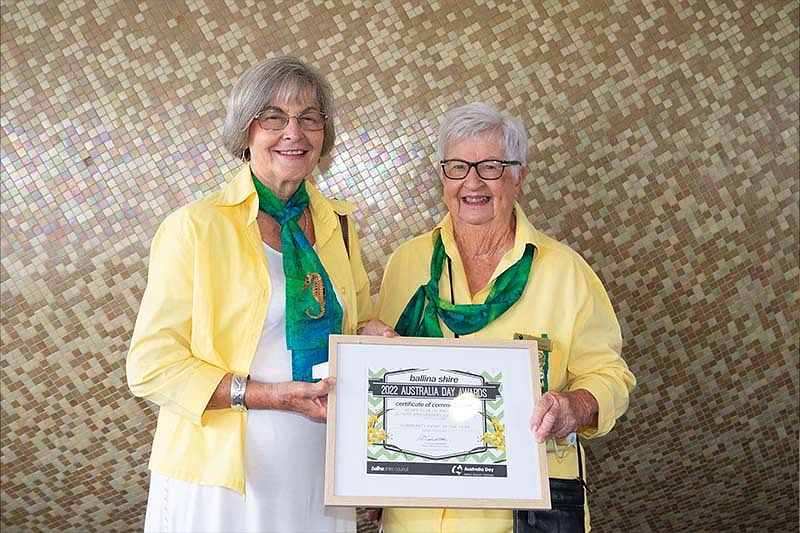 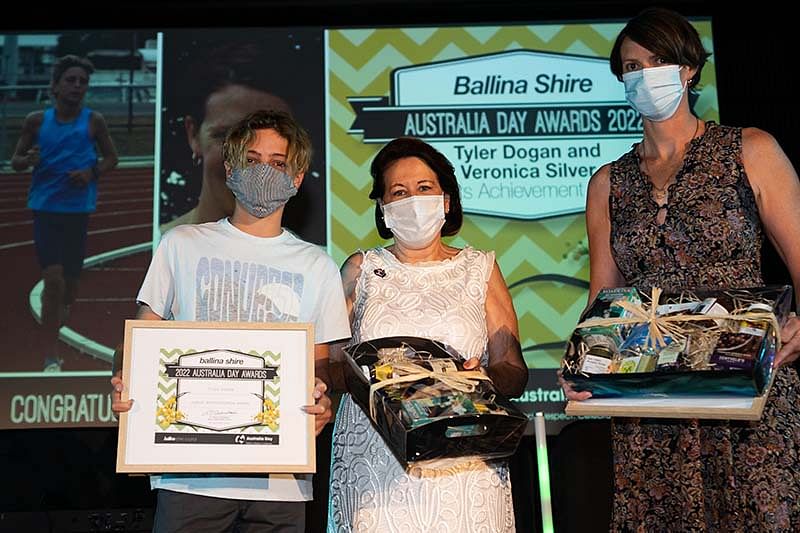 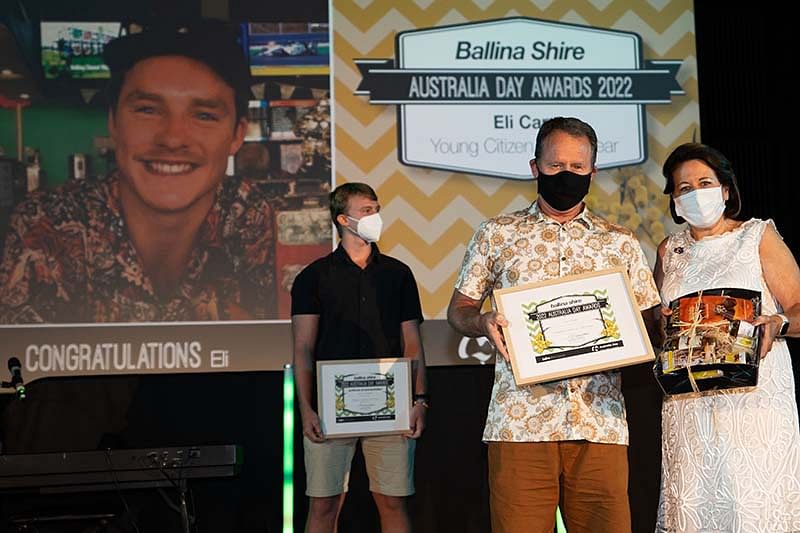 Young Citizen of the Year Congratulations to Eli Carr 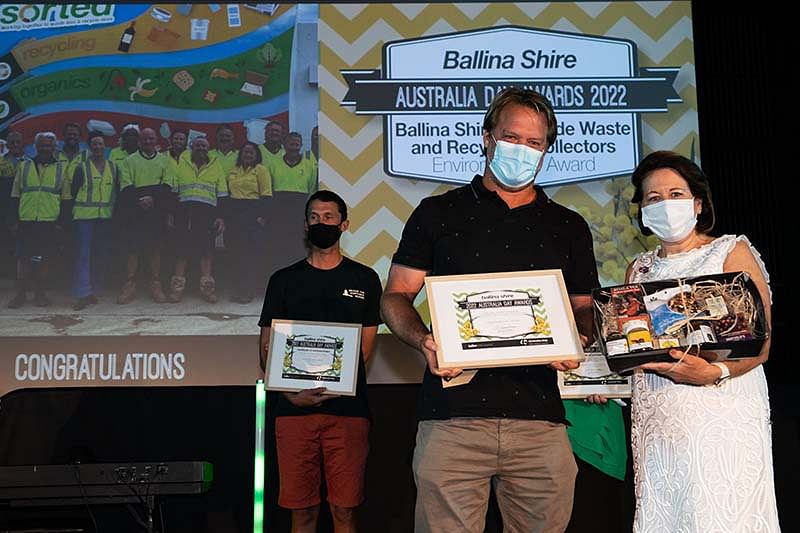 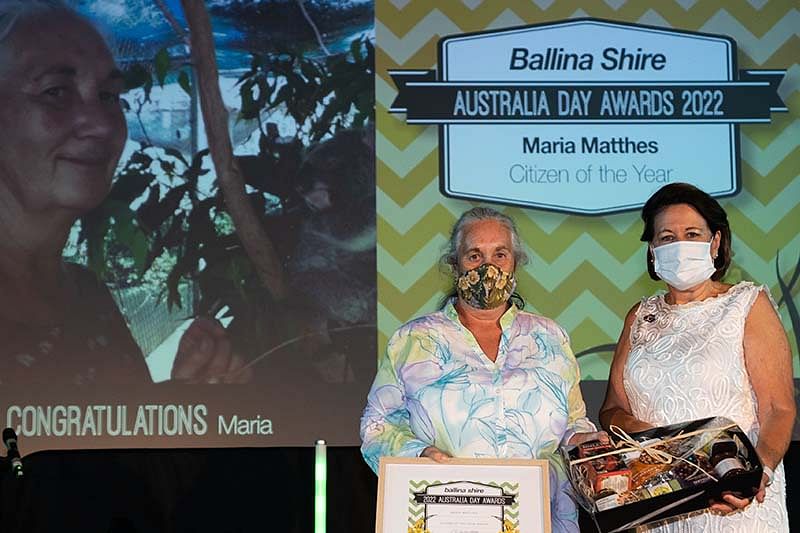 Citizen of the Year Congratulations to Maria Matthes