A record number of 44 nominations were acknowledged across the categories of Sports, Young Citizen, Senior Citizen, Environmental, Community Event, Arts/Cultural and Volunteer of the Year. The awards celebrate the achievements and contributions our unsung heroes make to our community – locally, nationally and internationally.

Mayor David Wright with special guest, Liz Ellis, Australia’s most successful netballer and Ballina Shire local, presented the awards. Marie Caldwell, 2019 Citizen of the Year, was called on to announce the 2020 Citizen of the Year.

The award winners are as follows:

CITIZEN OF THE YEAR 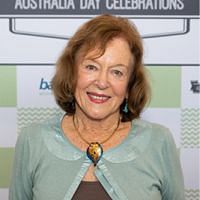 Anne is known as 'The Drought Relief Lady' and has been collecting and distributing cattle feed, hampers, toys and Christmas gifts to farmers since 1994. It all began when Anne learnt that recently-burnt cane tops made good cattle feed and organised weekly distribution of the tops to farmers. Every year Anne collaborates with local businesses and service providers to send food and Christmas hampers to farmers. Last year, Anne and her team distributed over 1,000 hampers to drought affected communities. Anne’s efforts help lift the spirits of our farmers and let them know they are valued and not forgotten. 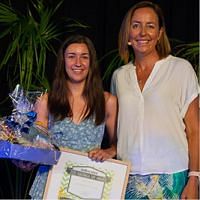 Hayley is an outstanding young woman who is a multiple Australian Mountain Bike Champion. Hayley competes across Australia and is a stand out rider in Olympic events. Hayley has been riding mountain bikes since 2015, and racing since 2016 and she has achieved outstanding results in this short time. Hayley is the current Under 17 Australian Champion across three disciplines XCC (cross country criterium), XCO (cross country Olympic), and XCM (cross country marathon). One of Hayley’s goals is to inspire people of all ages to get out and ride their bikes. 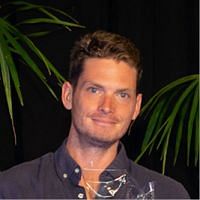 Lennox Head local, Ben Roche was born with cerebral palsy and started playing football at age six. He enjoyed playing, despite being left on the bench much of the time. He joined a development squad for the Pararoos, Australia’s Paralympic football team made up of athletes with cerebral palsy, acquired brain injury and those overcoming a stroke. As a junior Pararoo, Ben was inspired by athletes just like him who were achieving great results both on the field and in their personal lives. He was appointed National Teams Coordinator for Football Federation Australia in 2018. In 2019 Ben was the Pararoos’ Vice-Captain at the World Championships in Spain. He was Ballina Shire Council’s 2019 ‘Get Active Day’ Ambassador where the theme of the day was ‘Anyone Can Play’. With 53 games in the green and gold, Ben continues to inspire others with and without disabilities.

The other nominees for the Sports Award were: Angus Smyth, Lindsay Vaughan, Cooper Ulrick and Bec Washington. 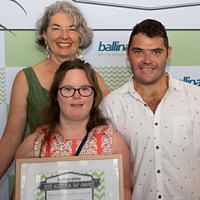 Sprung!! a Ballina-based not for profit community organisation, provides dance and theatre workshops for people with a disability. Sprung!! focuses on integrating dance and physical theatre to develop works that inspire mainstream audiences and promote a more inclusive society. Since 2014, Sprung!! has been led by artistic director Michael Hennessy, who danced with the Sydney Dance Company. In 2017 and 2018 Sprung!! was a finalist in the Australian Dance Awards. In 2019 they collaborated with the Northern Rivers Community Gallery and Andrew Christie to produce the first virtual reality installation at the gallery.

The other nominees for the Arts/Cultural Award were: Ballina Shire Concert Band and Little Dragons Integrated Community Group. 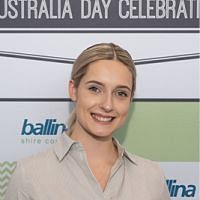 Amelia is an outstanding ambassador for Ballina Coast High School and her community. Consistently giving her best since year seven, Amelia has been a driving force behind the Ballina Junior Chamber of Commerce, Leo Club and an energetic member of the Student Representative Council. Amelia has received many school academic awards and represented her school and Ballina community in netball, touch football, debating and swimming. Elected school captain of Ballina Coast High School in 2019, Amelia has been an exceptional student and goes above and beyond to achieve her very best for herself and community. 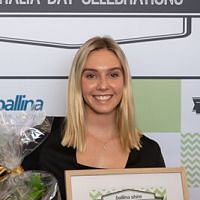 Zarah is an enthusiastic and caring role model, passionately serving her school, church and community. Zarah was 2019 Richmond Christian College School Captain and C3 Church Youth Group Leader. She is a founding member of a weekly bible study group where girls can chat with their peers and feel supported in a loving and caring environment. She also volunteers with the Ballina SES. Zarah will undertake tertiary studies at Southern Cross University in Primary Teaching – a natural fit for a young lady who has a gift of encouraging others to reach their full potential.

SENIOR CITIZENS OF THE YEAR (60 years or over) 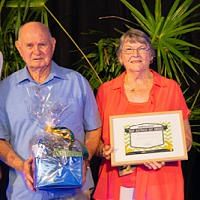 Raising five children and realising the need for a local athletics club, the Saxbys together with a few other local athletes reformed the Ballina Athletics Club in 1980. Since then they have inspired and encouraged generations of athletes of all abilities. The Club, under Barry and Janice’s guidance, strongly emphasises family values and good sportsmanship. The style of competition offers hope for all budding athletes, regardless of age and ability, to improve their health and fitness. The Club also provides a social outlet, and healthy activity for members to enjoy the beautiful Ballina environment. After 40-years Barry and Janice are the soul and heart of the Ballina Athletics Club as they continue to nurture and care for all Club members.

The other nominees for the Senior Citizen of the Year Award were: Anne Thompson, Patrick Carney and George Young.

VOLUNTEERS OF THE YEAR 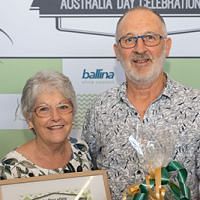 On hearing the cystic fibrosis diagnosis of their son Glen, Alan and Jenny Tunks set out to tackle the disease head on. From their first successful fundraising lamington drive, community minded Alan and Jenny aimed high and secured the rights to be the charity of choice at the Byron Bay Blues Festival. Each year, Alan and Jenny along with their team of volunteers, raffle three guitars signed by artists performing at Bluesfest. There is no government funding for cystic fibrosis, so it is a huge achievement that over 23-years the Tunks have returned over $650,000 to the Cystic Fibrosis Australian Federation.

COMMUNITY EVENT OF THE YEAR 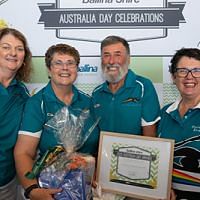 The annual two-day Rainbow Region Dragon Boat Regatta is unique in Ballina Shire. It caters for sports clubs and community teams showcasing Ballina as a tourist destination. Clubs from the Mid-North Coast, New England and South East Queensland participate. The club promotes community involvement, with community teams vying for the Ultimate Community Challenge to donate $250 in prize money to their preferred charity. Planning for the 2020 regatta is well underway. Dragon Boating is a fun form of physical activity with health benefits especially for breast cancer survivors. 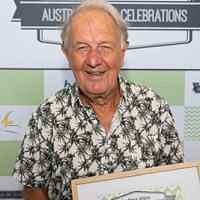 Malcolm has been serving the Lennox Head community for over twenty years, applying his vision and leadership for a better natural environment. The Lennox Head village and surrounding areas are in an environmentally healthier state thanks to his commitment and ability to encourage and teach others the importance and beauty of natural ecosystems. Landcare Lennox Head was initiated by Malcolm and Hilary Wilson in 1999. He extended his volunteering, holding multiple leadership roles with Landcare, FOLA, Heritage Committee and Residents’ Association. Malcolm continues to proactively monitor local issues; raising community awareness of environmental concerns and looking to potential solutions.